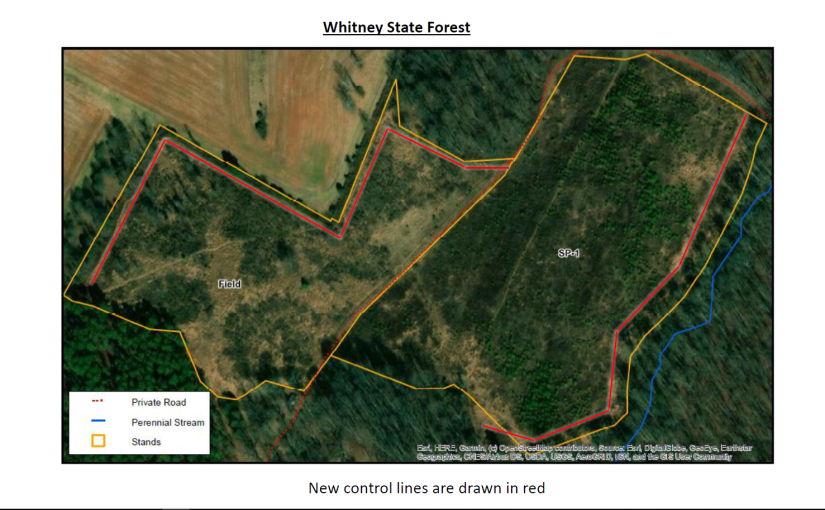 Edited from a December 2019 notice from Whitney State Forest.

This is in preparation for prescribed fire that the Virginia Department of Forestry (VDOF) hopes to accomplish this winter or early spring.  (Note: The first portion of the prescribed burn took place on January 22, 2020.) Please use caution on these trails because they are not yet packed and the footing may be loose. 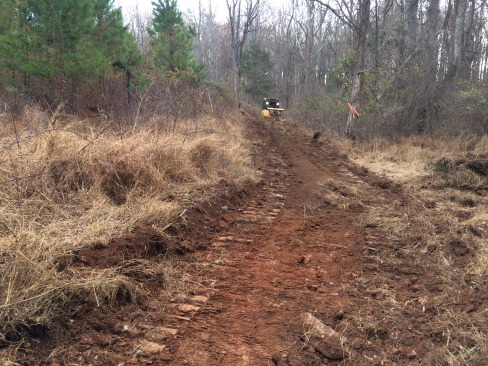 If a piece of open land in Virginia is left undisturbed, the vegetation will naturally transition from grasses to shrubs to trees, eventually resulting in a closed-canopy forest. Mature forest is very important habitat, but native grasslands and meadows are equally important and have been in serious decline for decades. When land stewards apply prescribed fire to young forests and open spaces, we set back that natural transition towards closed-canopy forest; this is to the benefit of many insects, plants, birds and other animals.

Shortleaf pine is a diminished native species that has been established at Whitney State Forest with the goal of creating a pine savannah ecosystem. A pine savannah will provide structure from widely spaced trees, as well as grasses and herbaceous plants for native wildlife. Our goal in burning the Shortleaf stand is to encourage native grasses and reduce briars, invasive species and some deciduous tree encroachment. Shortleaf pine is fire adapted, meaning that the prescribed fire will not be harmful to most of the trees.

When the Meadow at Whitney State Forest was burned in 2017, we saw an explosion of growth from native warm season grasses and a decrease in invasive presence. We hope to continue that trend with the reapplication of fire this spring. Native grasslands adjacent to mature forest are particularly beneficial because of the diversity they offer to the landscape.

VDOF is dedicated to the safe and effective application of prescribed fire and will take all necessary precautions for safety during the event. The forest will be closed on the days the prescribed burns take place and the fire will be lit in such a way that it will not escape to other properties. The first portion of the prescribed burn has been completed, and a second parcel will be burned in late winter. An effective fire administered with this timing will allow for grasses and herbaceous plants to regrow for the nesting season of native bird species.

VDOF plans to share follow-up information as the burns are completed.

One thought on “What’s Happening at Whitney State Forest?: Part One”