By Katlin Mooneyham and Lori Chamberlin

The City of Winchester and Frederick County are in the midst of an invasion. The spotted lanternfly, a non-native invasive insect, was first discovered in Winchester in January 2018. This pest feeds on more than 70 host plants worldwide and poses a significant threat to multiple Virginian industries. There is still much to learn about the spotted lanternfly, and the Virginia Department of Agriculture and Consumer Services (VDACS) has been working hard to control it within the infested areas.

One method of slowing the spread is treatment of a preferred host, Ailanthus altissima, otherwise known as “tree of heaven”. Smaller trees are killed with herbicide and larger trees are treated with insecticide to kill spotted lanternfly that feed on them. Tree of heaven itself is an invasive species and is widespread throughout Virginia, especially along roads or other disturbed sites.

Knowing the precise location of tree of heaven would greatly facilitate treatment, so Virginia Department of Forestry (VDOF) partnered with VDACS to map tree of heaven in Frederick County and the City of Winchester. The project is supported by Farm Bill funds awarded to VDACS and accomplished with U.S. Forest Service software (Digital Mobile Sketch Mapper). Protocol was based on a 2015 Forest Science paper entitled “Aerial Detection of Seed-Bearing Female Ailanthus altissima: A Cost-Effective Method to Map an Invasive Tree in Forested Landscapes”, and personal communication with forest health professionals from the Pennsylvania Department of Conservation and Natural Resources. This type of survey requires a helicopter in December/January after leaf drop. Female tree of heaven hold onto their seed pods and are visible from above during these winter months.

In January 2020, VDOF forest health staff went up in a helicopter to map tree of heaven. The survey followed pre-determined flight lines spaced at 2,000 feet (1,000 feet of visibility from either side of the helicopter) and flew at an average altitude of 400 feet above ground at a speed of approximately 80 knots. Individual female trees were marked as points, and clusters of trees were marked as polygons. Three VDOF employees conducted the survey — two spotters and a sketch mapper — with minimal Dramamine needed for motion sickness! 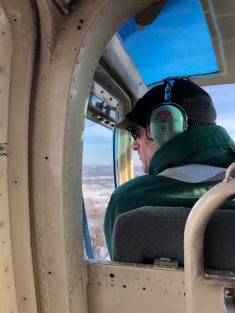 It will take some time to analyze the data and quantify the results, but general observations fit with our knowledge of this invasive tree species. Tree of heaven is most commonly found along disturbed sites and the highest numbers of trees were observed along train tracks, roadsides, field edges and a quarry in the southern end of the county.

Mapping female trees only gives us data for half of the population, but this winter survey is a quick and easy method to identify tree of heaven clusters to get a better idea of overall distribution. This data will be used by both VDOF and VDACS personnel to identify priority treatment areas and locate areas where the spotted lanternfly may continue to spread.